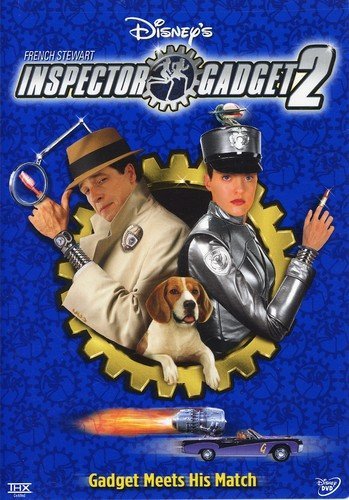 Get ready for more wild adventures packed with double the special effects, double the gadgets, and double the fun of the original. It’s Disney’s all-new INSPECTOR GADGET 2. Just when things are quieting down in Riverton, everything goes wrong. Inspector Gadget is put on probation. Claw stages a daring escape from prison and plots a new „Crime of the Century.” And the Mayor unveils a new and improved G2 – an all-robot, all-tech, all-female gadget! Could it get any worse for our hero? Mishaps, miscues, stakeouts, and showdowns ensue as Inspector Gadget (French Stewart TV’s 3RD ROCK FROM THE SUN) and G2 (Elaine Hendrix, THE PARENT TRAP) set off to go-go save the world with a little help from their friends – niece Penny, her dog Brain, and the wildly tricked-out Gadgetmobile!|INSPECTOR GADGET 2 has twice as many gadgets and special effects as the first film – in fact, the film contains close to 300 visual effects in all.|Elaine Hendrix, who played „the other woman” – Meredith Blake – in 1998’s THE PARENT TRAP, stars as G2, an all-robot, all-tech, all-female Gadget.|In being true to the original cartoon character, writer-director Alex Zamm decided to make the villain Claw „faceless.” „It’s part of the game of the movie,” Zamm says „You almost keep seeing Claw and you don’t.”|Making the effects in the movie believable was a very elaborate process that involved months of planning and resulted in over 1,000 pages of storyboards.