Everybody is using twitter to read recent news, to promote their activity on internet, to promote great articles and even for their dogs. 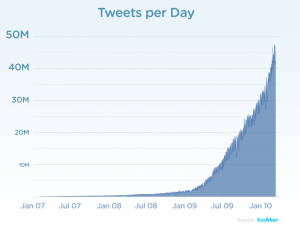 Reading on Twitter’s blog I’ve seen that Twitter was announcing that its users are posting almost 50 million Tweets per day. Quite impressive, don’t you think?
Twitter started its activity in 2009 and at the beginning there was about 2.5 million publishing per day and in one year (until the end of 2009) everything was going up to 35 million tweets per day, an impressive growth.

Twitter, next to Facebook is one of the most popular social networks and we can find many celebrities and people from all categories here. If we make a simple mathematic count, we could discover that 50 million Tweets per day means about 600 Tweets per second (and that doesn’t include spam tweets).

I can wait to see its trend this year, but at this amazing rate it will be over many other social networks. You know you can find and follow us at twitter.com/gadgetfever.
Source: Twitter Blog